It don’t mean a thing if it ain’t got that Swing.

I have been backpacking the Pacific Crest Trail. As I walked 700 miles through California’s desert, forests, and mountains, I have thought about events surrounding the implosion of Colorado’s Green Party.

Every candidate whom the Colorado Green Party nominated for statewide or federal offices in 2014 or 2016 has been expelled from the state party, along with the elected representatives of the chapters representing Jefferson, Boulder, Broomfield, and Gilpin Counties. The Jefferson and Greater Boulder Green Party chapters have been denied voting rights in the state party.

More than 95 percent of registered Green Party members in Denver are denied the right to vote on the nomination of the party’s candidates, the election of its officers, and the approval of its bylaws.

For the first time since the Colorado Green Party started running candidates in 1994, the party has not nominated any candidates for state or federal offices for 2018.

Reflecting upon this situation, I have decided to file as a candidate for the Green Party nomination for US President in 2020.

Part of my message is that Green Party members should treat each other with respect. It’s time to stop the hatred and character assassination.

Arn Menconi, the Colorado Green Party nominee for US Senator in 2016, responded to vicious attacks on his reputation by saying: “Politics is a blood sport.”

Well, Green Party politics should not be a blood sport. A party that claims to stand for nonviolence, social justice, and respect for diversity should not be a hate group.

Green Party discussion forums are frequently saturated with nasty personal attacks. People scream at each other:

A media commentary about the 2016 Green Party national convention was headlined: “The Green Party Takes Itself Seriously, But No One Else Should.”

Why should anyone take the Greens seriously if we can can’t even work together without trying to drive each other away?

There is an appalling lack of civility that must be remedied for the Greens to move forward.

I feel that the Green Party has lost sight of the big picture. We face a perfect storm of converging ecological crises due to human impact on the environment. Climate change, mass extinction of animal species, deforestation, ocean acidity, topsoil erosion, and so forth.

We are in a state of ecological overshoot. The ecological footprint of 7.6 billion people greatly exceeds the sustainable biological carrying capacity of the Earth. The collective impact of humanity is rapidly disrupting the ecological boundaries that sustain life on Earth.

The Green Party should “speak truth to power” about what is happening in the real world. We don’t need another party playing a populist game, telling voters what political strategists think they want to hear. Truth is not a popularity contest.

A Green Party presidential nominee should be a standard bearer for the party’s values, its platform, the roots of the Green Party’s message. Trying to recruit the next celebrity who might conceivably break five percent of the vote in a quest for future campaign funding is a dead end path.

I was on the ballot four times as a Green Party candidate in Colorado, and twice in Arizona.

In 2012, I filed as one of six candidates for the Arizona Green Party’s presidential preference election.

Here is a summary of the platform I used as a Green Party candidate for Congress in Colorado: 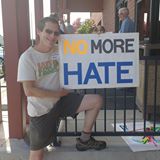